The Duke of Sussex revealed he feared “history repeating itself” in a reference to his mother’s death as he recounted his royal life with wife Meghan. Harry was heard making the comparison in a preview clip of the couple’s much anticipated interview with Oprah Winfrey. US television network CBS released two 30-second excerpts from Oprah With Meghan And Harry: A CBS Primetime Special - which is set to air at 8pm Eastern Time in the US on Sunday, or 1.00am Monday UK time.
Subscribe now for more! bit.ly/1NbomQa
Broadcast on 01/03/2021
Like, follow and subscribe to Good Morning Britain!
The Good Morning Britain USfilm channel delivers you the news that you’re waking up to in the morning. From exclusive interviews with some of the biggest names in politics and showbiz to heartwarming human interest stories and unmissable watch again moments.
Join Susanna Reid, Piers Morgan, Ben Shephard, Kate Garraway, Charlotte Hawkins and Sean Fletcher every weekday on ITV from 6am until 9 every weekday!
ITV Hub: bit.ly/37kf3wD
Website: bit.ly/1GsZuha
USfilm: bit.ly/1Ecy0g1
Facebook: on. 1HEDRMb
Twitter: bit.ly/1xdLqU3
www.itv.com
#GMB #PiersMorgan #SusannaReid 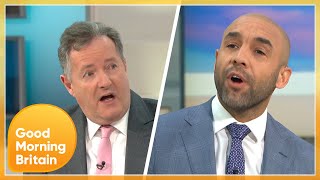 Piers Morgan: 'I have no sympathy for Harry and Meghan' | This Morning

My Thoughts on Reality Shifting